Category Archives for "Houses In Lakes"

Grand Houses In The Lake District 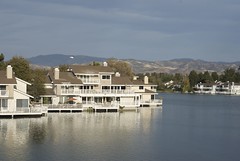 Grand Houses In The Lake District
In looking at Large Houses, Small Houses and Cottages we are looking at the evidence in the built landscape of the interaction of social and economic forces as well as those of topography and climate. Different social classes went through similar stages of development in their houses but at different times. Similarly in looking at the agricultural buildings of the farmstead we are seeing another Great Rebuilding reflecting status, albeit of a different sort from that of the domestic buildings. The rebuilding of farm structures tends to be later than domestic structures in the first place, but the benefits of properly planned buildings erected in a permanent fashion went first to the farm buildings of higher status, such as barns and stables, and passed down to those of lower status, such as pigsties and poultry sheds, rather later. Furthermore the buildings show how the tremendous improvement in farming techniques led to a demand for more farm buildings and of even better design and construction than those already provided.

Large Houses, which were occupied by families of some local importance, survive in some form from the late medieval period, are rather more numerous from the sixteenth and seventeenth century, but merge into the category of polite architecture when built in the late eighteenth century and afterwards. The earlier buildings include some real or fanciful provision for defence, but later examples make no such acknowledgement. Large Houses were also farmhouses and substantial ranges of farm buildings, many of nineteenth century date but some of earlier dates, provide a setting for the domestic buildings. Isolated towers are not characteristic of the Lake District. More commonly the early Large House was based on a conventional Tshaped or Hshaped plan with one wing taken up as a tower, battlemented and with walls of defensible thickness, and sometimes, as at Beetham Hall near Milnthorpe and Middleton Hall near Kirby Lonsdale, with stone curtain walls and some simple gatehouse. Even these houses are relatively less numerous than in other parts of Cumbria where closer proximity to raiders and more productive land worth more ambitious raiding made provision for defence more understandable.

The Tshaped Large House plan included a multi-storey wing at right angles to a hall which was open to its roof. The more common Hshaped plan made use of two such wings, one at each end of the open hall. The original central hearth heating the hall has in all cases been replaced by a fireplace: a deep chimney breast boldly projecting from the rear wall of the hall, or, more commonly, a wide stone fireplace backing onto the cross-passage which ran between hall and crosswing. Conventionally there was another passage, running through the lower crosswing and leading to an outside kitchen, but here the passage was vaulted and flanked by vaulted buttery and pantry, an arrangement which may be seen at Preston Patrick Hall. As elsewhere in the country the hall was usually modified by the insertion of an intermediate floor in the late sixteenth or the seventeenth century and the great chamber so formed was made more modern and more comfortable by the provision of a plaster ceiling which, as at Yanwath Hall near Penrith, conceals the magnificent carpentry of a medieval roof.

Have you been to Arizona? Or have a plan to visit the region for vacation or business trip, particularly in the City of Lake Havasu? Until a sudden thought of lifetime settlement takes place into your mind but you have no idea how to find right property for you? Lake Havasu attracts big numbers of visitors for some time now and quite possible making them as instant inhabitants for qualities of Lake Havasu City Homes for Sale will be set at a higher quality now and then. There are several ways to find a lower price, but let the following ideas simple and easy tips to help you.

All you have to do is look through the online offers as possible motivation for choosing your dream house, which provides Lake Havasu City MLS listings for no hassle procurement of any type of property available. It is best to plan your stay in the place much earlier, most of Lake Havasu Real estate programs for clear appointments only. Before you actually buy the property, hold many preparations for it in various aspects. Outstanding designs and styles maybe quite limited to certain times so better hurry up for accessing their site and have an updated active listings in Lake Havasu City homes for Sale. There are many points of view which you can be benefited with by choosing the said programs which makes it easier for the procurement transactions. You can also look out for real estate agents that are proven to be reliable and certified one in engaging with the mentioned field dealings. The more pleasure, the less spending and a better stay you will expect in Lake Havasu, Arizona. Given this idea, it is possible for you to visit the main area to personally do your selection among the properties, for it makes you spend money less and enjoy more. You can also have connections in the company to give you more information updates.

The best home deals in Lake Havasu City Homes for Sale gives a flow of comfortable and stress free living away from the busy life routines. Find yourself a way out in your wishes of the house you want to own in present days as so in the future. More force with you, the most stress hit you up. There would be nothing wrong with buying a house, if you think that is really the most perfect moment for you to do, right? Never go running to buy a house just because everyone else. You should put in mind that this is not as easy as if you are buying a candy. It requires focus and dedication and, above all, you should be able to meet the financial part of keeping you going to buy a home without hesitating interested parties. Learn how to expand the purchasing technique that allows the consultation of experienced personnel in a given field. You can also view and take family feedbacks as a great guide for the following types of transactions.