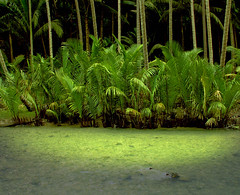 Wisdom From the Waterfront

Wisdom From the Waterfront

Despite much ado about environmental carbon footprints, owning recreational property is becoming more and more commonplace. The waterfront variety commands a much heftier price tag, which needs little explanation. Not only do we want to be by the water, we also enjoy being on the water and in the water. And if you’re someone who is lucky enough to live near water, count your blessings now.

I must admit, while on recent vacation at a lovely lakefront cottage, I found I was happiest when I was in view of the water. The first strokes I paddled in the canoe provided the biggest bliss of all, that of being on the water.

Isn’t it true that no matter where we live in the world, if we want to rest or play, we head for water? Subconsciously, we must understand the healing effects.

It isn’t just the lake that caused reflection, but the drinking water.

The lifeline of organisms is no small thing. And how we take it for granted. Our well water put an abrupt end to that.

There’s nothing like the obnoxious smell of sulfur to snap us into consciousness. Though safe to drink, we couldn’t bring ourselves to do so. Running the tap to wash dishes was quite enough, thank-you. Luckily we had back-up – imported city water. However, limited quantities dictated conservative use.

As the smell diminished with each passing day, I observed that our usage increased accordingly. I wondered why I let the water run when I brushed my teeth, when days earlier I managed the same process with less than a cup. Suddenly we were washing the dishes in a sink full instead of a couple inches. We no longer washed fruit and vegetables in a bowl. We spent more time in the shower.

I wondered if this was really an improvement and how lucky we were to have choices.

The extremely hot temperatures we experienced at the lake necessitated drinking a great deal of water to stay hydrated, not withstanding an occasional cold beer. Given herbal tea is my usual beverage of choice because it warms me up, I was thrown into rediscovering the deliciousness of plain, cold water. I wondered why most of us didn’t catch on to drinking water until we started buying it in a bottle from the likes of Coca-Cola and Pepsi under the names of Dasani and Aquafina. Buying water seemed to make it fashionable to drink. I’d say we’re a crazy lot with warped values. Anyway, I’m just grateful that I have access to clean, clear, odorless water, when millions never do.

If winter makes us want to eat, summer makes us want to drink. This summer, try substituting some of the high calorie colas, fruit juices and cold beers for nice, cold water. Remember that alcohol is a diuretic, so for every beverage you consume, you need water to compensate. And if you’re working out, as I know you are, you’re perspiring. You need to compensate for that too.

One of the things I love about vacations is slowing down enough to pay attention to things I don’t normally think too much about – like water. Being by the water I learned that if you build a cottage, save the trees and you won’t need air conditioning. Secondly, don’t waste water. Drink it.

I invite you to visit http://www.weightandwellnesscoach.ca for more articles like these.

Having A Great Vacation At Waterfront Cottages

Having A Great Vacation At Waterfront Cottages

Planning a perfect holiday or vacation in an absolutely stunning location if often the reason that people look to the Waterfront Cottages. These cottages offer a person the unique opportunity to escape the busy lifestyle that you may e caught up in and enjoy a little time to slow down and enjoy the wonderful world that surrounds the cottage.

The cottages are completely equipped. A person can pack a light bag and find themselves totally prepared for their vacation. You will find that the kitchens have everything that is needed to enjoy quiet meals on the patio or drink tea from the veranda. You will find the market is fully stocked with all of the supplies you need to test your culinary skills.

From the cottage you will have a view of the lake and countryside. The inviting towns and villages are filled with friendly and warm people that will invite you to share in their activities and market days. Finding the gathering place for old-timers in the village, a person can sit and hear endless stories about the history of the area and find out about places that must be explored while visiting.

Whether a person is participating in one of the festivals or enjoying the quiet walk around the lake, the countryside will provide a stunning backdrop against a beautiful sky. A person can spend time fishing or rent a boat to cruise around the lake. Wherever you go, you will feel like you are among friends and will find wonderful places to explore throughout the area.

Staying at the cottages is a delight. Every need has been anticipated including the bicycles that are leaning against the side of the cottage. Riding along the lanes and paths, you will be able to enjoy the freedom of this great area. Or, hike up the hill and see the towns and villages below. Wandering through the forest and meadows one feels that they are the first to venture into this magical place.

Some of the larger towns offer clubs, dancing, and dining that is a short drive from the cottage. A person will enjoy venturing to the larger town and participating in the activities. But sitting in one of the local cafes a short walk from the cottage will still be a great delight. Enjoying the local cuisine that includes fresh fish, vegetables, and seasonal fruit while drinking a cup of hot tea will be relaxing.

When taking the hiking trails that are laid throughout the reserves, you can see the wildlife and beautiful flowers and plants of the region. Spending time at the rest points will allow you to absorb the fresh air and enjoy the natural action that is taking place around you. At night, the imagination can run wild with stars so close that you can almost touch them. Without the smog and noise of the city, you will begin to discover the wonder of starry nights.

There is something for everyone to do at the Waterfront Cottages. A family will find that this is a great opportunity to spend quality time together and enjoy biking, hiking, and the local water sports. A writer will be inspired by the glorious landscape and the wonderful people that populate the region. And, a day dreamer will find that they have finally found a home that nurtures the day dreamer in everyone.

Vacationers will surely enjoy the stunning scenery and charming atmosphere of the Muskoka cottages. The equally popular Fractional cottages also make worthwhile investments if you look forward to spending quality time with family and friends.